For those of you who may have missed this. Get a beer, Get comfy. Put the vid on full screen. Play. You probably wont like the subject matter but you’ll love the words & pictures. It was certainly one of the best 72 minutes of my life.

Royal Babylon – The Criminal Record of the British Monarchy

“Will Buckingham Palace look as solid in 2034 as it does now? Words are dangerous things remember. A Republic might be brought into being by a poem”
Virginia Woolf in Time and Tide, 1st December 1934

I Will Not Pay Taxes Until

Last Friday, US Congressman Dennis Kucinich introduced HR 6357, a bill which aims to ‘prohibit the extrajudicial killing of United States citizens’ by the federal government. In other words, in the Land of the Free, they need to pass a law to prevent the government from indiscriminately murdering its own citizens.

Now if this doesn’t give one reason to pause and consider the distortions of liberty that have taken place in western civilization, I don’t know what will. Think about it:

Does a free society send government hit men to eliminate anyone they perceive to be an enemy of the state?

Does a free society have hundreds of police agencies, each with the authority to deprive a man of his life, liberty and property in their sole discretion?

Does a free society have hundreds of thousands of laws, codes, rules, regulations, and policies which effectively criminalize nearly every aspect of one’s existence?

Does a free society lead the world in prison population?

Does a free society tell its citizens what foods they are / are not allowed to consume?

Does a free society steal your money at gunpoint to buy bombs that they drop by remote control on brown people in faraway lands?

Does a free society debase its currency and plunder the purchasing power of its citizens?

Does a free society saddle unborn generations with obligations they never signed up to bear?

Does a free society award near total control of the economy, the money supply, and everything tied to it, to a tiny elite few?

Does a free society brainwash its citizens into believing that they live in a free society? (at least the Chinese know they’re not free…)

Ask yourself, are you really living in a free society? Are you free? If not, why not? What else could possibly be more important?

It takes courage to answer honestly. But once you realize the truth and begin to see the system for what it is, it can be a liberating and life-changing experience.

You’ll find that there are places where you can live free in this world. There are ways to preserve your dignity, your privacy, your livelihood. You’ll find that you can build great camaraderie and mutual trust with like-minded souls because you share the same values, not the same color passport.

My guess is that you’re reading this because you’ve already started down the road to freedom. But you might feel alone… intellectually isolated in a sea of automatons.

You’re not alone. More and more people are waking up every day and beginning to realize the incredible fraud that has been perpetrated against them. When enough of them figure it out, this system will be finished.

That’s why I fundamentally believe that today is one of the most exciting times to be alive since the French Revolution. And we’re just getting warmed up.

If you have any friends or loved ones who still exemplify that self-deluded, bombastic serf mentality, I encourage you to pass this along to them… and challenge them to answer honestly.

Again, reposted in case you haven’t come across this anywhere else.

” Kevin West’s new film has been specially made to mark the 7th anniversary of the 7th July 2005 London bombings. It includes some of the new footage released by the sham Enquiry into the bombings held in 2010/11 and the subsequent release of more disinformation about what is supposed to have happened that day.

Based on and idea by Tony Farrell, sit back and watch Tony and Nick deal a pack of cards itemising many of the key points overlooked in the discredited and chaotic so-called ‘official story’.

It is a witty, refreshing and sometimes moving reappraisal, giving emphasis to the human cost seldom explored in other films on the subject. The events of 7 7 are delivered with energy by Nick and Tony. Belinda McKenzie also lends a hand to the proceedings — a fighter for truth and justice in the world… ”

I’m reposting this (from: http://www.meetup.com/wearechangeleeds/messages/boards/thread/24834132/ by Sam Bamford).

Well, it seems like THEY are trying to start the process.

Britain: Most intrusive surveillance regime in the West

” The UK has found another way to snoop into its citizens’ affairs. Internet and phone companies are set to install so-called ‘black boxes’, which will monitor e-mails, social networking activity and calls, and store data for a year. The authorities insist that only limited details will be kept, but activists are raising privacy concerns. “

” Internet privacy issues are again in the spotlight as a controversial bill is debated in London’s Parliament. Its adoption will allow the UK government to spy on what Brits write and post online.

While authorities say the Communications Data Bill creates a so-called ‘intelligence picture’, critics and lawmakers fear the bill will build a totalitarian online regime in the UK. If adopted, the bill will grant British intelligence full access to UK citizens’ web communications – secret services will be able to monitor who is talking to whom, when, and where in the country.

The UK Home Office says ‘communications data’ will only gather information about the sender and recipient of a piece of communication such as an email or instant message, but not the content of the communication.The architects of the legislation claim the idea is to protect the public against crimes like terrorism and child abuse.

‘Black boxes’ will be installed by internet services providers to filter & decode encrypted materials – including social media and email messages, something which critics say will have an impact on personal privacy.

“As written, it gives the Secretary of State far too broad a power. It allows data collection exercises that are perfectly reasonable – but would also allow pervasive black boxes that would monitor every online information flow; an idea which is clearly unacceptable,” Julian Huppert, the Liberal Democrat MP has told the Financial Times.

Web advocate, Aaron Swartz warned RT “either a rogue guy, ISP employees, rogue government officials or hackers [would] just break into the ISP and steal all this personal information.”

The Regulation of Investigatory Powers Act (RIPA) already grants UK law enforcement the ability to monitor ISP and website phone and email records, but the new document would ensure that all providers keep tabs on their users.

Swartz has told RT the new proposal will be “almost like opening up every letter sent through the post office so the government can make a copy – ‘just in case’.”

UK taxpayers will pick up the estimated £1.8bn cost of the new programme over the next 10 years.

The UK government is creating a massive risk for every citizen and business in the country with such a move, believes Jim Killock, executive director of the Open Rights Group.

“If you collect all of this information in one place and then create a sort of secret somewhat protected door for law enforcement to go and view the data and to make queries, then you set that door up to be broken into for absolutely anybody on the Internet,” he told RT. “And that means that there are going to be a lot of people from governments through to criminal gangs who would start thinking ‘this could be really, really useful to us, why don’t we have a go at it.’” “

All over the world, The People are rising up against their oppressors.
Of course there will always be a section who will fight for the status quo. 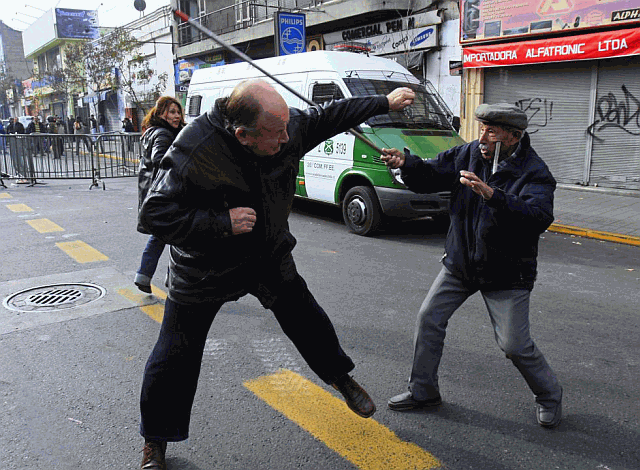 “ More than two dozen people were seriously injured and 64 were arrested after a riot broke out in Santiago on Sunday during a screening of a new documentary honoring the late dictator Augusto Pinochet. …

At a nearby square, hundreds of demonstrators held what began as a peaceful protest against the Pinochet supporters. Chanting “murderer, dictator, thief,” about a hundred masked protestors rushed toward the theater, which was heavily blocked off by police.

More than 500 officers in full riot gear responded by firing tear gas and water cannon to prevent them from disrupting the screening. Officers pinned many demonstrators down during the two-hour skirmish. “The authorities who are currently in control were part of the Pinochet regime and were involved in genocide. That is why they are still trying to repress us,” said Lorena Pizarro, president of the Association of Families of Arrested and Disappeared. …“